In grade school, as the youngest son of a perpetually exhausted single mom, I’d sing a song of my own invention to get things rolling in the mornings. I’d sneak into Mom’s room, tap her on the arm, and begin:

As I recall, there wasn’t anything else to it. The whole thing was just repeating those lines two or three times. Mom would usually laugh and fall back asleep. If we actually did have somewhere to be at a specific time (I hated being late for school), I’d return with an unsolicited encore performance a few minutes later.

I’m sure this nagging was adorable.

In the lyrics, you’ll notice my savvy identification of applying make-up immediately as a woman’s most urgent concern upon waking – a veiled commentary on the thriving “Let’s make women feel as bad about their natural selves as possible” culture.

Actually, I was just glad to have found anything that rhymed with “wake up.”

A couple years later, during a week-long class camping trip to cap our 5th grade year, a friend and I bravely volunteered to write the song for our cabin group to sing at the campwide talent show. That one began:

There was another line in there somewhere about the camp naturalist’s fascination with scat (animal poo, not scat singing; this was a new and endlessly entertaining vocabulary word for us at the time) and how she “don’t care what you think about that.” Truly, she didn’t care. I still recall her crazy-eyed enthusiasm, trying to get a bunch of kids excited about all the information to be gleaned from animal poo.

Our cabin group’s performance at the talent show went well, I assume. All these years later, I don’t remember much more than the song itself.

For a creative writing assignment in high school, I wrote a blues song lyric. As suburban white kids do. The fresh-out-of-college, somehow-even-whiter-than-me student teacher latched onto it as a fine exemplar of the form. He read it aloud to the class, not sounding very much like B.B. King or Muddy Waters.

I don’t have any of those lyrics to share with you. Can’t remember ’em. They were written on commission. Plus, that student teacher really did murder them.

Anyway, to pick up this illustrious songwriting career in the present day, you’ll want to know that I have lately been writing a few more lyrics. If you enjoy collecting obscure mentions of people you know in print, you can track down the September-October issue of American Songwriter magazine, where you’ll find this: 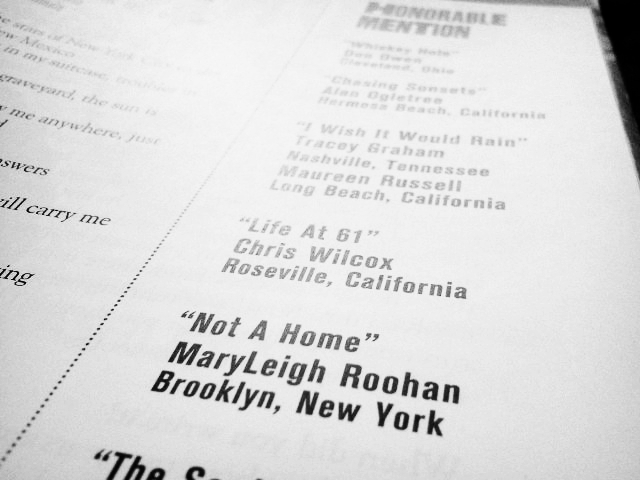 An honorable mention in the magazine’s bimonthly Lyric Contest puts me in the top percentile or so of submissions, which is none too shabby for my first time entering with a song I had just written. For comparison’s sake, the writer of the First Place song lives in Nashville, has co-written with “The House That Built Me” songwriter Tom Douglas, and began work on her winning lyric two years ago.

She also has a professional promo shot, featured in the magazine, that makes her look like a model. This has nothing to do with the judging criteria but plays right into my mostly unexamined belief that conventionally attractive people have all the luck.

Making up songs is not actually a competitive sport, but knowing that some folks found merit in one of my first real attempts as an adult spurs me onward and makes me think it’s not a ridiculous thing to keep pursuing. I’m eager to see what else I come up with. Perhaps I’ll share bits of it with you in the months ahead.

Enjoy this? Tell someone about it.

Something to say about this? Public comments (that may appear on the site, subject to the rules of grammar and good taste) will be open for one week after the posting of each new thing. Or you can always send an email.